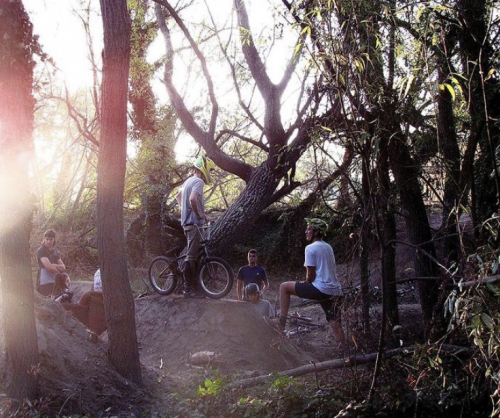 Locals frequenting the Tutaekuri River in Taradale have watched with intrigue as some serious looking bike jumps have begun to take shape amongst the trees on the riverbank.

The jumps are the work of 20-year-old mountain-biking enthusiast, Charlie Makea, his brother, Alex, and friend, Aaren Markenstein.

An accomplished rider, having represented Hawke’s Bay and New Zealand in downhill mountain-biking, as well as an experience bike trail builder, Charlie says he has always wanted to build bike jumps in the sheltered river space as there weren’t any dirt jumps to ride in Napier.

“Dirt jumping is an awesome way to improve skills on the mountain bike,” Charlie says.

“We were inspired to build the jumps by the river because the dirt is easier to dig (as it is sand based), and having the river next to the jumps meant we could use the water to shape and compact the dirt perfectly.”

The trio used spades and rakes to move the dirt, and watering cans to shape it. The result – a sophisticated right line (path).

“It was a lot of hard work, but it was worth it!

“After seeing how many kids use the jumps it would be awesome to see some more lines and variations of grading created, so more kids can ride them. It has been hard to find the time to improve them as just maintaining them takes a lot of work.”

“We have had heaps of feedback from riders, but we are more stoked about the walkers coming by and saying how good it is for the community.”

As well as riders and locals alike, the new track has full support from the Hawke’s Bay Mountain Bike Club, of which Charlie is a long-time member, and Hawke’s Bay Regional Council.

“As you can imagine the jumps built by these lads took a huge amount of effort and skill,” Hawke’s Bay Mountain Bike Club President, Scott Richardson says.

“The jumps are advanced so take a lot of skill to ride well i.e. big air, backflips, gaps.”

“They enhance the existing infrastructure already in place opposite Pettigrew-Green Arena, so allow for great skill progression.

“It’s fantastic seeing so many kids hanging out down by the river and giving the jumps a go.”

Since getting his first mountain bike at the age of eight, Charlie’s enthusiasm and talent has enabled him to travel the world and make a career out of the sport he loves.

“I have been living in Europe for the past few years, travelling the World Cup circuit.

“This year I stayed home and I’m currently working for Southstar Trails, travelling around New Zealand building bike trails. I plan to go back to Europe as soon as possible to get back into racing.”

“Come down to the Taradale tracks and get into it!".