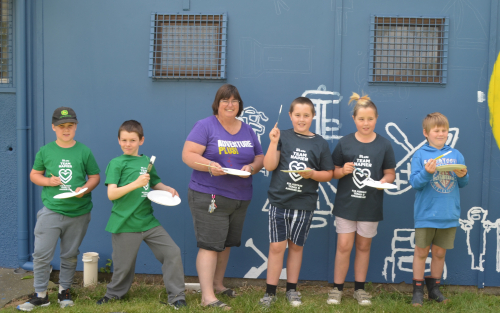 A dream of having a mural beautify the external wall of Napier’s St Augustine’s Scout Hall has finally become a reality after 30 years.

The Scout Hall, adjacent to a greenbelt on Latham Street, was susceptible to graffiti and vandalism and it was a long-time aspiration of the Late Scout Leader and artist, Anne Feierabend (whose Scout name was Mahu), to have a mural decorate the space.

Six years after Mahu’s passing, the Scouting community is thrilled to see the bespoke mural by renowned Napier artist, Ren Hardgrave, which was funded with the help of Napier City Council’s Te Puawaitanga – Green Communities Together Fund, come to fruition in her honour.

St Augustine’s Scout Leader, Alison Knauf, says the mural was a long time coming due to lack of funds and more urgent tasks, such as property maintenance, taking priority.

“When I saw there was a grant for community projects to beautify Napier I thought “this is our opportunity”. We’ve been without Mahu for six years, but we haven’t forgotten what she wanted to do for this place.”

Member involvement in the creation of the mural was important and Alison says she is grateful Ren was able to assist and understand the significance of the mural project.

“The mural had to be about the kids and their interests and Ren embraced that,” Alison says.

“He spent an evening with them and allowed them to give him their artistic ideas. He did the base work and let the kids contribute, which Mahu would’ve wanted.”

With paint brushes in hand, Scouts and Cubs along with their whanau, who ranged in age from 7 to 87 years old, added their personal touches to the mural, which features the organisation’s main colours, blue and yellow (representing the sea and the sun) and key activities they take part in.

Ren says it was great to be part of a “collaborative community initiative”.

“It was awesome to be able to transform a grey, graffitied shell into a work of art that represents a globally recognised organisation doing great work in our communities.

“It was great to see both young and old members participate in the application of the design.”

“Now we can add art to the list of activities!” Alison says.

“We believe the local community will love the mural as much as we do. It really does make the area so much more vibrant.”