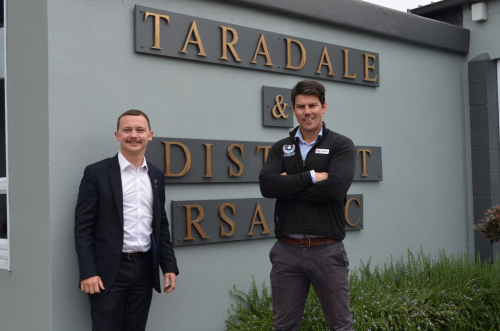 Generations of young and old are coming together under one roof to enjoy socialising, playing games, telling a few yarns and of course to devour the renowned $5 roast.

The unity of age groups is the result of hard work led by two young men, Taradale RSA President, Brayden Coldicutt and Taradale RSA Manager, Ben Allen, who are proud to introduce the next generation of members to an institution they both have a strong affiliation with.

At just 24 years old, Brayden is the youngest President of an RSA in New Zealand history. He began working at the Taradale RSA as a waiter at the age of 15, was promoted to bar manager at 17 and when he went off to study a Marketing degree in Palmerston North, he travelled home to fulfill his work duties every weekend.

“When I finished my degree and moved back to Napier, the president at the time asked me to join the committee because he wanted some younger blood coming in,” Brayden says.

“After a year of being on the committee I successfully ran for Vice President and the following year, when I was 22, I became President.

“I wanted to get rid of the stigma that you have to be retired or a returned service person to join the RSA – because you don’t! Only 20% of our membership consist of returned servicemen. Anyone can join. We are a family-friendly club that is all about friendships, fun and good times.”

Brayden says the most rewarding part of his role is building relationships with members, which he has had the privilege of doing for many years due to being the third generation Coldicutt to be affiliated with the Taradale RSA.

“My dad has been a member since I can remember and my grandad is the founding member of the concert party, which has been performing annual concerts for 52 years. It is nice to continue the family tradition.”

Meanwhile, Ben Allen, 36, is carrying on a similar legacy as the Manager of the Taradale RSA, following his father, Ricky Allen’s footsteps, who was also the manager for 21 years.

“I was nine years old when dad started here, so I grew up in and around these four walls and I have worked here on and off for the past 20 years.

“I think Brayden and I have a good mix of energy and love for the job combined with a personal history with the club, which the members appreciate.”

Ben and Brayden, together with staff and the committee, have revitalised the premises, located at 156 Gloucester Street, with a fresh new look, as well as new initiatives to cater for members of all ages. They host monthly quiz nights on the first Thursday of every month (which Brayden creates from scratch), weekly snooker and pool games, dancing and prize draws.

The Taradale RSA’s own ‘Bus Stop’ restaurant has earned a reputation in its own right for its family-friendly atmosphere and fresh, affordable menu.

“We want to make everyone who comes into the Taradale RSA feel so welcome they want to come back.”

And indeed, that is just the case, as Ben says “We have an increasing number of active members who visit two to four times a week, which is awesome.”

“The place is really pumping as a community hub now and it’s only going to get better,” Brayden says.

“We really do offer something for everyone. “It is great to see younger people joining the club and the mutual respect shown between the generations is pretty special.”