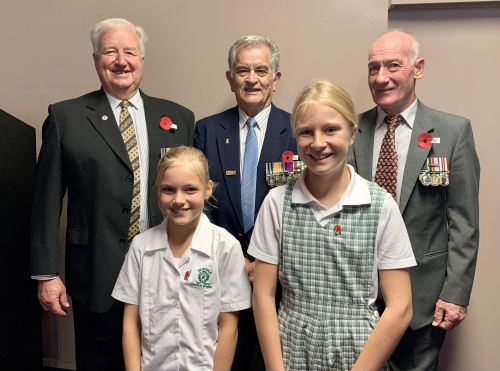 Budding young public speakers from Taradale and surrounding districts schools had their chance in the spotlight recently, at the fifth annual Spirit of ANZAC Speech Competition.

Organised by the Greendale Services Association, the competition saw 20 speakers between the ages of 11 and 18 years old come together to share their speeches, which were based on the theme ‘ANZAC and Me’ or ‘ANZAC and my Whānau'.

Greendale Services Association member and veteran, Peter Grant, says the competition’s theme, ‘Spirit of ANZAC’, stems from Gallipoli and forms the foundations of what the Association believes should be the four pillars of community – Courage, Comradeship, Commitment and Compassion.

Competing in the Primary School category were 10 children representing Porritt, Patoka, Greenmeadows, Reignier, Arthur Miller and Bledisloe schools; there were seven children in the Intermediate category, representing Puketapu, Tamatea Intermediate, Taradale Intermediate and Patoka schools and three in the Secondary category, all from Tamatea High School.

Peter says the competition’s aim was to remind young people of the sacrifices our forebears made for our country.

“A way of doing this was to get them researching what sacrifice we as a country have made, and encouraging them to research their own whakapapa, for their own fallen and hopefully also returned heroes,” Peter says.

“The reality is that there are very few New Zealanders who don’t have whānau in their whakapapa who have served, and as part of personalising their speech, we want them to express what effect and impact the actions of their tīpuna and whānau have had on them as individuals.”

Stella's speech centred around the idea that her great great grandfathers fought on different sides (Kiwi and German) and if peace and freedom hadn't been restored, she may not exist today. She spoke in detail about the men and the sacrifices they'd made.

Jake’s speech was a tribute to his great grandfather who joined the army to go to WW2 when he was 19 years old. His tīpuna was a member of 28 Battalion, also known 28 Maori Bn, and he was a member of C Company, which was made of men from the East Coast. Jake talked about the impact the war had on his great grandfather, particularly mentally with what is known today as Post Traumatic Stress Disorder (PTSD).

“Kaiata Kaitoa won the Secondary School category. She also spoke about her great grandfather and she will speak at the Taradale Club ANZAC Day service, led by the Greendale Services Association veterans, at 8am this Sunday.

“The judges and veterans present were overwhelmed by the quality of the speeches and how much time had been spent researching, writing, and rehearsing ahead of the competition.

“We regard all people who make our competition as ‘winners’ and reward their efforts with a book prize, a poppy pin for their uniform and a certificate of participation,” Peter says.