Whānau at heart of Maraenui netball 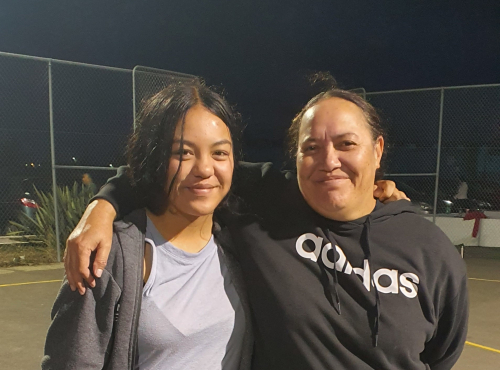 Every Saturday morning during winter, three netball teams from the Maraenui Rugby and Sports Association, along with their children, head to the Hawke’s Bay Sports Park for a morning of netball.

Netball is making a strong comeback at the Maraenui Rugby and Sports Association this year, with two more teams joining the long-standing Maraenui Pumas team competing in the Hawke’s Bay netball league.

Despite, their uniforms being destroyed in the Napier Floods in November, the teams have had a strong start to the season (the Pumas currently at the top of the premier 4 grade) with the assistance of dedicated volunteer coaches and managers, along with first-time sponsors, Tama Huata, Bay Scaffolding and Kai Time.

Maraenui Rugby and Sports Association netball committee Chair, Zoe Hakiwai, says they put a call out to their community for more players earlier this year as well as sponsorship support and they had a great response.

“We now have ‘Ahurei’, a youth team and ‘Marino’, which is a social team. A lot of mothers play in Marino, while their daughters play in Ahurei,” Zoe says.

For the 34 players and their tamariki, these Saturday mornings are not all about just playing netball – it is also about having time out, companionship, and most of all, about whānau.

“Whānau is and has always been at the heart of our club. A lot of mothers tend to get forgotten about and they’re always putting themselves last, so for us it’s about empowering our ladies and giving them that mana.

“Our children are with us all the time – even when we play they’re looked after on the sideline by aunties, sisters, nieces and friends who have become whānau.”

Like many current players, coaches and managers, Zoe’s whānau were some of the founding members who established the club 40 years ago.

“My grandparents, along with many others, migrated to Napier to work in the freezing works, shearing and apple picking industries in the late 1970s. Their community came together for sport such as softball, cricket, fishing and of course, rugby league.

“Before the club was established there was a rugby league team called the Pania Panthers and when my mother was older, she and her friends would go down and watch. They were subsequently encouraged by my Late uncle, Greg Allan, to start a netball team to keep fit for softball in the summer.”

It was Zoe’s parents’ generation that initiated the merger of all the sports codes to form the Maraenui Rugby and Sports Club. While they have been based in many parts of Napier over the years, they are now proudly back where it all began in Maraenui – continuing the legacy of their tīpuna, especially the Late Eve (Missy) Huata, who was the club’s longest active netball player who sadly passed away last year.

“There is a lot of stigma about Maraenui being low socio economic and having high crime rates, but a lot of people aren’t seeing the positive side of what’s happening in our community.

“Our club gives our whānau a place of safety, community and belonging. It is also about being healthy and ensuring all our players can access health services and lead a healthy lifestyle. We believe if we make an effort to look after ourselves our younger generation will pick up on it and continue that kaupapa.”