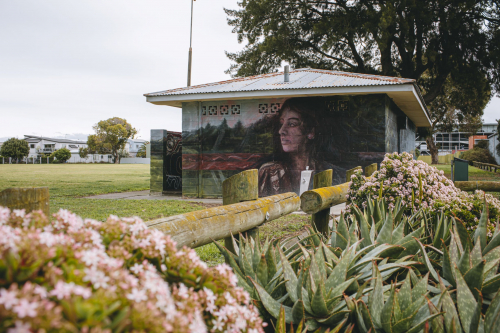 A vibrant mural by Napier artist, Ryan Edwards, has brought the once dreary ablution block in Ahuriri Park, in Battery Road, to life.

Bursting with colour and culture, the full-wall mural depicts a young woman in a coastal setting, staring into the horizon, whilst draped in traditional fabrics.

“I designed the mural with younger people and families who use this space in mind. However, there are plenty of surrounding residents both on Battery Road and up on Napier Hill, who can spot this from their homes and may feel more inclined to visit the park too,” Ryan says.

“I think it’s a great way to lift this space up. The main ideas of the mural speak to progression, forward movement and strength in the direction of one’s inner vision. There is a small hidden section there too that is my own little acknowledgement to the cultural forces that shaped these lands long ago – just something I thought was right to include.”

Ryan, also known as Ryn, produced the mural with the help of a grant from Napier City Council’s Te Puawaitanga – Green Communities Together Fund. It took him approximately 40 hours over the course of six weeks to create, in between working as a tattoo artist and other commitments.

While born in Napier, Ryan spent much of his childhood living in different cities around New Zealand, before returning to Napier when he was 14 years old. It wasn’t until he was 19 that he started to explore art as a form of relaxation whilst working in a stressful job.

“I picked up basic drawing techniques like scribbling and doing dots everywhere, which became graffiti. Then once I actually got ideas for what I wanted to draw I started using ink pens and water colours. From there I started designing tattoos for myself and it really took off. It's incredible to reflect on how it seemed so unbelievably impossible at the time, but I just kept doing it. It was extremely satisfying to do something that was totally centred around me and my mind.”

Since those early days of exploration, Ryan has developed a passion for jewellery making and using 3D CAD (Computer Aided Design) programmes, along with the technical side of engineering, such as physics and mathematics.

Now, at 27, Ryan is proud to call Napier home and admits there’s nowhere else he’d rather contribute his art.

“I have a deep love for architecture and how it plays into art, which is a big reason why I love living in Napier and I think that is reflected in the art pieces I create. I have so much love for this spot – it has helped define who I am.

“In the future I plan to do a lot more art pieces around the city. Some of them will have strong stories to tell – especially ones that I dedicate to the city like this one,” Ryan says.