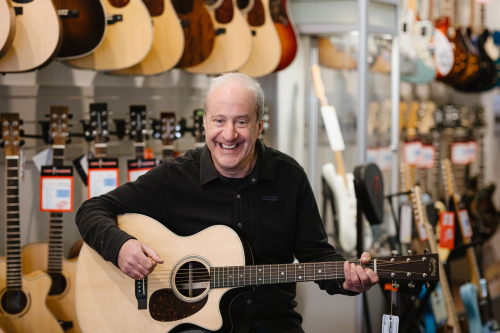 If you’re into music or football, chances are you’ve come across Richie Jackman.

Richie is the friendly face behind Music Machine, in Hastings Street, Napier – one of the oldest independent music stores in New Zealand. For the past 28 years he and his loyal team have helped hundreds of people, both amateur and professional musicians, find the instrument perfect for their needs.

Over the years Music Machine has become renowned for its excellent service and good prices. The business has gradually expanded from supplying locally to nationally, thanks to reputation and online sales, which are more prevalent post COVID-19.

“Being independent means my team can select instruments and equipment based on what we think and know are the best, rather than being dictated by someone else,” Richie says.

Here are a few fun facts about Richie and Music Machine…

FUN FACT #1 Since opening in 1993, Music Machine has moved premises five times, but, ironically, has always remained in Hastings Street.

FUN FACT #2 Richie is a former professional musician whose band, ‘Power’, was signed with Arista Records in the UK, and had a roster that included Whitney Houston and Thompson Twins. The band released several singles and toured with numerous artists including ‘The Temptations’. The video for their first single ‘Work Hard’ boasted more plays in Europe than Bowie/Jagger ‘Dancing in the Street’! Before moving to New Zealand, Richie was also a music writer for Warner Brothers Chappell. Since moving to New Zealand, Richie resurrected a kiwi version of ‘Power’, which features his youngest son, Ben.

FUN FACT #3 Richie is just as well known on the Hawke’s Bay soccer scene. Coming from Liverpool his passion for football is almost engrained in his DNA. Richie is a founding member of Marewa United Football Club where he has been a player, manager and, more recently, coach. He still laces up his boots on the odd occasion and enjoys playing in the same team as his eldest son, Joe.

Richie’s secret to a successful business… Remember to have a laugh and make it your hobby!