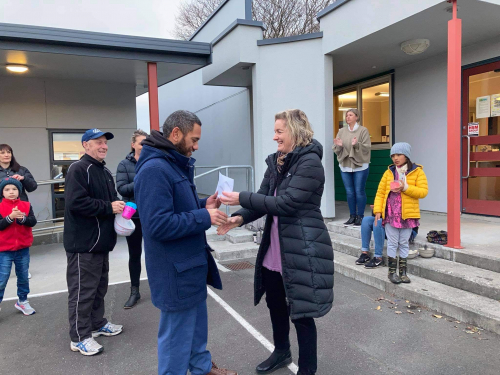 Students from Reignier Catholic School began their school day by moonlight on Friday, 2 July, as part of their Matariki celebrations.

Around 100 excited students and whānau met at the pou (Māori post) at Tareha Park, in Guppy Road, to celebrate Matariki, the Māori New Year, and to learn about and pay respect to their ancestors.

The day began at 6.30am with a karakia and kōrero, led by Ngāti Pārau hapū Chair, Chad Tareha, a direct descendant of Tareha Te Moananui, of whom Tareha Park is named after. Students and whānau then ventured off with torches to pick up rubbish around the park as part of their role as kaitiaki of the pou.

“It is all part of caring for creation, which is a value of our Catholic social teachings.

“We are very grateful to Chad for sharing his knowledge of our area and ancestors with us and it was wonderful to see so many families take part in the event, especially at that time of the day! There was a real sense of community and optimism amongst everyone there, which is fitting for Matariki.”

The Tareha Pou was entrusted to Reignier Catholic School, along with Arthur Miller School, in 2012 as part of a Napier City Council initiative, which saw local schools adopt a park and form an association with the local Māori community – Ngāti Parau. The pou is one of five in the Taradale area designed by Roberta Hawaikirangi.

Following the rubbish collection, students and whānau went back to school for a shared breakfast provided by FOR (Friends of Reignier), followed by a full-school Matariki liturgy, waiata and further Matariki learnings.