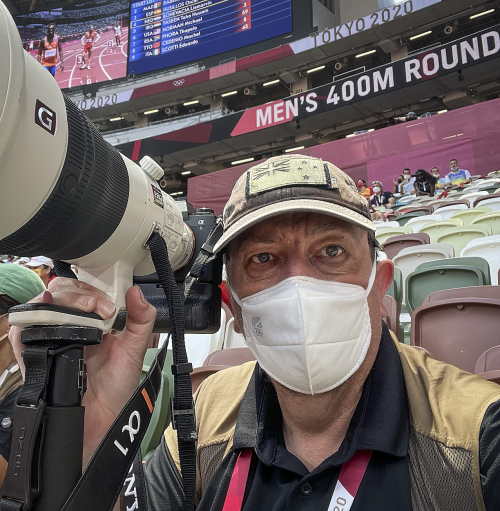 It isn’t often we get to hear from those who take photos for a living - they would rather let all the attention be on the work they do. Award winning Napier based photographer John Cowpland shares a little about the job he loves that has taken him all over the world, including to the Tokyo Olympics.

It all started with a game of football.

One which didn’t end too well for John, although happily for him it wouldn’t be his last. Rather than sit around - or hobble around on crutches after suffering a broken leg in an earlier match - the 17-year-old borrowed his Dad’s camera and started snapping away from the side-lines.

Fast forward a few years, and John is a renowned photographer. Initially in Hawke’s Bay he was a sport and news photographer for daily newspapers, including Napier’s Daily Telegraph, and later Hawke’s Bay Today, before striking out in 2003 and starting his own company, Alphapix.

He’s still a “one man band” so to speak, but calls on other professionals to lend a hand (or a camera or two) when there’s a lot of work on. With a varied client base in Hawkes Bay and beyond there’s never a shortage of interesting jobs to shoot. These can range from local people, products and produce to major sporting and cultural events, like All Blacks or Black Caps tests, or the Mission Concert. There is always plenty to cover in Hawke’s Bay, from the Big Easy to the Hawkes Bay Hundy or Kidnappers Challenge, or the Unison sponsored medal ceremonies for sports teams, and Hawke’s Bay Hospitality Awards.

Unfortunately the last two had to be cancelled or postponed due to lockdown, but restrictions and making last minute changes due to the COVID-19 pandemic is something John has become used to. He was only recently released from MIQ after returning from Tokyo.

John was part of the three-strong Photosport team in Tokyo. The testing regime before leaving, on landing and during the Games was strict. Everything revolved around Covid, he says, the safety of the athletes and everyone at the Games is always paramount, but there was a major difference between Tokyo and the 2016 Olympics which stood out. “In Rio there were guys with guns everywhere, they were more worried about terrorists. In Tokyo they were as welcoming as they could possibly be, friendly and as helpful as possible – from behind a face shield or mask.”

“My favourite event to cover is always going to be one I haven’t shot before. I’m looking for something different so the bigger the challenge to shoot, the better.”

If you’ve seen photos of boxer David Nyika or slalom canoeist Luuka Jones in action, not to mention triathlete Hayden Wilde post-race, or Dame Valerie Adams, Tom Walsh or Lydia Ko on the podium in Japan, there’s a fairly good chance those photos were taken by John. “The most fun event was the tennis, covering Michael Venus and Marcus Daniell as they picked up the bronze medal.”