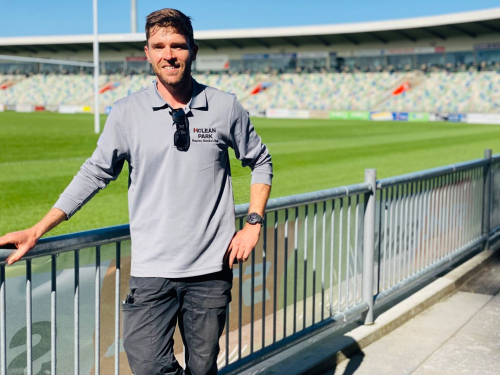 For a healthy dose of lawn envy, take a close-up look at the turf at McLean Park. Quite possibly the most important job there belongs to Turf Manager Henry Logan. He and his team mates ensure the grass at Napier’s premier sporting venue is pristine all year round for the city’s sporting fixtures. As well as McLean Park, Henry and his team manage Nelson Park, home to the Central Stags cricket team and Hawke’s Bay Cricket Association.

Henry joined NCC back in June. Growing up in a horticultural family, he began his career in turf management at Hastings District Council, working at club sports field level. Wanting to branch out to managing stadium turf, Henry departed Hawke’s Bay for Northland, where he worked at Whangarei’s Semenoff Stadium and Cobham Oval. He then joined Eden Park’s turf management team, before coming to NCC.

Henry and his team will typically start the day at around 7am, when they discuss the day’s must-do jobs. There’s little downtime. Grass always grows, and so do weeds. Even the slow-growing winter season isn’t that much quieter. By far, mowing takes up the most time. Aside from that, fertilising is important to keep away disease. Each season brings its own general maintenance needs. In Autumn the cricket blocks get killed off and re-seeded ready for the following summer. It’s a constant cycle of growing, mowing, weeding, fertilising, killing and re-establishing grass.

It also means constantly looking weeks ahead. What’s the weather doing? Which events are coming up? What are the needs for each event? Some of the jobs though are completed last minute. For rugby, line markings get painted on within 24 hours of kick-off so they look crisp and clear for TV. The logos on the field are contracted out, but Henry’s team stencil on the numbers. On the day of a match, Henry says they can generally relax and enjoy the atmosphere. That said, a close eye is kept on the line markings, and any big divots caused by a rugby scrum will be fixed during half-time. Cricket calls for more work during the match. There are actions written into the laws of the game, such as rolling the wicket, sweeping up debris and re-marking lines.

Fortunately mud isn’t a problem at McLean Park. Ever since the turf upgrade in 2018, the state of the art technology and infrastructure has dealt with the rain. Underneath the turf is a sand carpet and drainage system. Rain soaks through the sand profile, into the pipes and is discharged as stormwater.  Automatic irrigation is also used. Henry uses an app to monitor moisture levels and can get the sprinklers started no matter where he is. The end result is a great looking field on television.