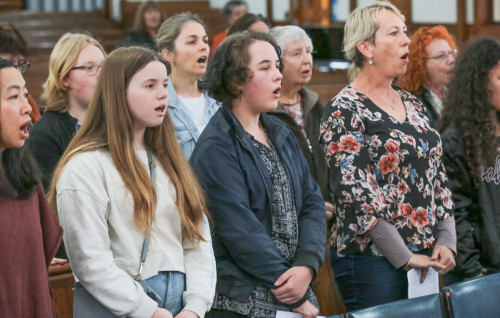 Whether singing solo or singing with others, this Saturday 15 October is your opportunity to take part in a special event.

Since 2012, the third Saturday of every October has been World Singing Day. The global singalong was founded by Colorado musician Scott Johnson. It is an opportunity for communities to get together and celebrate through the international language of music.

In Napier, it also happens to be when the Hawke’s Bay Art Festival’s Nuit Blanche- Art After Dark, a night of art, dance, street performance and, you guessed it, live music, will be held.

Anna Pierard and Sarah Walmsley, the founders of home-grown company Festival Opera, say singing’s benefits go beyond what you can see and hear.

There are physical and emotional benefits for participants and audiences alike, says Sarah. “Seeing a live performance is an easy thing to engage in. The connection between audience and singers, that feeling of wellbeing it brings, is so important for everybody who has been through this pandemic.”

Festival Opera is helping many Hawke’s Bay singers and concert-goers maintain their enthusiasm for the art form. This happens through performances, such as We Will Rise Again Mahler’s Symphony No.2, and Sharing the Dream, next weekend, Hawke’s Bay Anniversary/Labour Weekend.

The Mahler Symphony No.2 concert in Napier will feature over 150 singers, from high school age through to retirees, keen amateurs and professionals. Being around teens during rehearsals helps the more mature participants stay energised, and encourages them all to support each other in a non-judgemental way, says Sarah.

“These shared goals and experiences are ways singing can support a happy, healthy community.”

This will be an evening of opera classics, with full symphonic orchestra accompaniment rarely seen in Hawke’s Bay.

All of those performing have been mentored and supported by Dame Malvina and her Foundation.