In remembrance of a regal legend 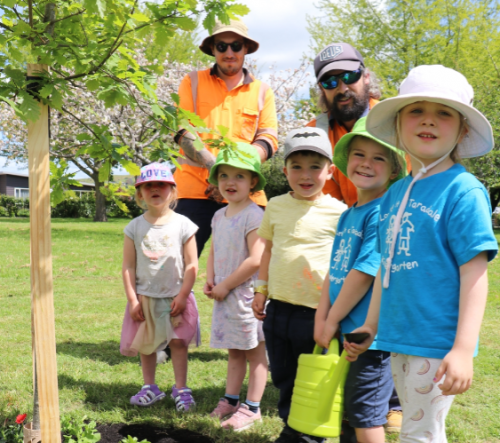 As the longest serving British monarch, the Queen has been seen as a symbol of strength and stability, the same qualities attributed to the English oak. This remarkably hardy and long lived tree supports more life than any other tree species in the UK.

Now, two of these iconic trees have been planted in Napier, one at Taradale Park, the other at the Kennedy Park Rose Gardens.

Taradale Kindergarten kids were enthusiastic participants in the tree planting at Taradale Park this week, singing a waiata to welcome the tree, and thank the Napier City Council gardeners.

Head teacher Karen Doyle says the planting has been a great opportunity to share some gardening do’s and don’ts with the children, who will be sharing watering duties with the gardening team. “In years to come the children who took part will be able to look back and know they have had a part to play in looking after a special tree.”

The planting was inspired by The Queen’s Green Canopy movement. Initially formed to mark the Queen’s Platinum Jubilee year, it has the goal of planting a million-plus trees, creating a living legacy and a lasting tribute.

Following the wishes of its patron, King Charles III, the initiative has been extended to March 2023, to encourage more people to plant trees in memory of Her Majesty’s 70 years on the throne, making her the longest serving British monarch.

It reached the ripe old age of 100 before a couple of days’ worth of heavy rain saturated the soil so much it came crashing down, in 2011.

The saplings still have some way to go before they reach the leafy heights of their predecessor.