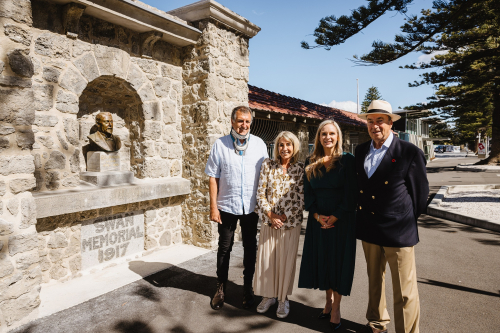 The Swan Memorial, next to Ocean Spa, is in memory of George (George Henry) Swan. He  served an extraordinary 27 continuous years as a councillor, mayor, on city boards and in the House of Representatives.

The memorial, featuring a bronze bust of Mr Swan, is now 105 years old. It was funded by public donation and unveiled four years after his death in 1913.

It sits near the former site of the public paddling pool constructed during his time in office. In 1991 the pool was filled in and became a play area next to a new pool, part of what is now the Ocean Spa complex.

The recent repair and conservation of the memorial was overseen by heritage specialists Salmond Reed Architects. Limeworks Ltd, specialists in the repair of masonry and monuments, carried out the restoration.

The advanced age of the memorial means that great care needs to be taken with it, says Jason Tickner, Team Leader Parks, Reserves and Sportsgrounds.

“All memorials deserve respect. This one pre-dates the Art Deco period and is an important reminder of someone who played a big part in Napier’s history.”

Wellington-based John Swan, the great-great-grandson of George Swan, says he has been looking forward to the day he could visit the restored memorial in person. “I am pleased and very thankful to the architects, those who restored the memorial, and Napier City Council for their commitment to this project.”

“The outcome is stunning and I feel George Henry is set for another century’s service in the city that he loved.”

There are two other Swan related features able to be viewed by the public in Napier: the Swan Memorial Lamp, by the Rotary pathway, behind the Soundshell, and the sign for Swan Street, a nod to the long gone White Swan Brewery Mr Swan founded in the vicinity.

Mr Swan arrived in Napier from Newcastle upon Tyne in 1864. He became a borough Councillor in 1874, mayor in 1885, served on several city boards and represented Hawke’s Bay in the House of Representatives in Wellington for a three year term, until 1893. This was during his fifth term as mayor.

He also established a notable photographic business, (some of his work is in Te Papa’s collections) and became a successful brewer and hotel proprietor.

During his time in public office the Marine Parade sea wall, the planting of Norfolk pines, the progressive development of the Soundshell and surrounding gardens, modelled on those he saw on his return trips to England, were completed. These were followed by the construction of the paddling pool.

At this time there was disastrous flooding throughout Hawke’s Bay. As mayor he initiated a nationwide appeal for funds to assist the flood affected families, then led the committee which led to the Clive Memorial on Marine Parade, in their honour. He retired from public service in 1901.

When they met in Napier recently, they also browsed through some of the Swan memorabilia in the Hawke’s Bay Museums Trust collections.