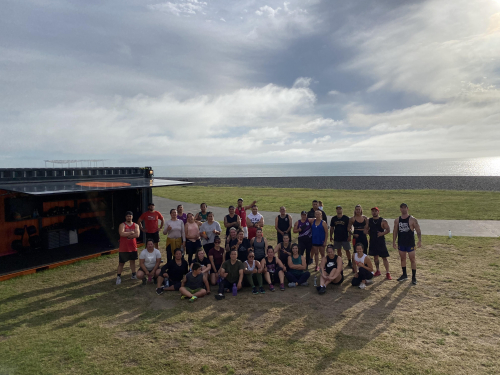 Essentially a fitness centre based out of a shipping container, Domynis comes complete with weight rack systems, Olympic bars and weights, skipping ropes and boxing bags, sound system and lighting, allowing people to work out right on the beach!

Domynis is the brainchild of Napier health professional, Levi Armstrong, and his cousin, Whare Timu, of Wellington. Levi gained national headlines in 2015 for his Patu Gym and its unique way of engaging and encouraging the Napier community to participate in sport.

Levi agrees that the Covid-19 pandemic, and resulting lockdown, has and will test the wellbeing and resilience of New Zealanders. The aim for Domynis is to be a shared space, so anyone in the community can use it.

“With Whare’s design work and my fitness background we wanted to create something innovative. We have seen the struggles our whānau go through, especially following the COVID-19 pandemic, and wanted to create a solution,” Levi says.

“The uniqueness of the pod’s design is that it allows people to ‘come together, move together’, with a focus on the mental, physical and social wellbeing of whanau. We named Domynis after our good friend, Domanique, who was a fitness enthusiast and part of our Patu whanau, but unfortunately passed away from cancer in 2019.

Alongside Domynis, Levi and his wife, Dana, have developed a Quality of Life measurement tool, called the Meke Meter. The instrument is an image-based, self-reflection tool that requires minimal text – instead, the user scores themselves out of 10 (one being awful and 10 being “meke” or excellent), on mental, physical and social wellbeing. Once the Meke Meter is filled out, the user will receive an overall score of wellbeing and any areas of attention identified.

The Meke Meter is available online at www.mekemeter.org and organisations can access the real time data to understand the wellbeing of themselves, their staff, students or clients that utilise their services.

“Schools are also using it to gain an insight into the wellbeing of students and the data used to inform teaching pedagogy.”

Health and fitness have been a part of Levi’s life since he was a youngster. Growing up in Hastings and subsequently Napier, he and his younger brother, Junior, would often venture out to play sport and do exercise.

“Our father has been a part of the Mongrel Mob since it first started in the 60s but we didn’t want to venture down that path.

“We have both gone through EIT and graduated with degrees – Junior now works for Sport NZ and I am doing this venture on top of doing a Masters of Health at EIT. My cousin, Whare, has come from a similar background and his father is a Mongrel Mob member. He decided to venture down to Victoria University and become an Architect.

“I believe health and fitness is the best medicine. It has saved my life. I love training and wake up to train at 4am every day. I have four tamariki and have to stay fit for them. They are my why.”

Through Domynis, Patu and the Meke Meter, Levi’s mission is to make health and fitness accessible, affordable and achievable for the Napier community.

“I hope to pass on my knowledge to whānau to support them to make changes. It doesn’t matter where you come from, we just have to believe in ourselves!”

Domynis will be available on Marine Parade until January. The cost for sessions is free for rangatahi (18 and under) and $10 per week for other users.

It will then move to Maraenui where there will be no cost for community members.

For more information about Domynis visit the Facebook Page