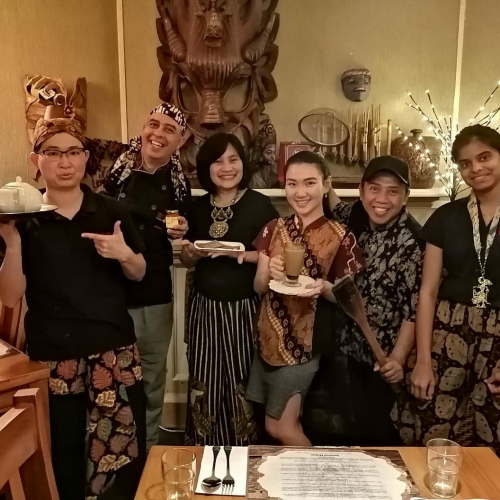 When the rain continued to fall heavily last Monday, 9 November, and it showed no sign of letting up, owners of Napier’s Restaurant Indonesia, Riza, and Vivi Ambadar, turned to the news and social media for the latest updates.

Shocked to see so many Napier homes underwater, they gathered their staff together and quickly got to work in their kitchen, preparing meals for people affected by the flooding.

Riza, says the decision to provide meals was spontaneous and seemed like the right thing to do in a time of crisis.

“We barely had any customers that night – and the two nights after – so it was the least we could do to help,” Riza says.

Riza, Vivi, and their staff prepared and supplied approximately 300 meals over the course of two days, consisting of fried rice, chicken or fish curry with rice, vegetables – even vegan fried noodles!

“On the second day, we had more time to prepare better meals, with veggies and protein – whatever we had in stock at the restaurant. We also ordered more stock to meet the demand.”

The entire Restaurant Indonesia team pitched in and volunteered their time and energy to assist with providing the meals. Volunteers were called on via social media to deliver the meals to the people most in need.

“We are grateful for the help of our team and volunteers. They were remarkable – donating their time and petrol and distributing the meals to the affected houses.

“The Apple Press Company also donated 240 bottles of fresh juice for us to distribute with our meal packs, and Hong Ke Long Asian Groceries in Onekawa gave us 50% off the takeaway boxes for the meals, which was greatly appreciated. It was certainly a team effort.”

Having endured a global pandemic and now a major flood, Riza says 2020 has most certainly been the toughest year since they took ownership of the restaurant in 2018. However, with a strong and dedicated team behind them as well as a supportive community, they are positive about the weeks, months, and years ahead.

Restaurant Indonesia is located at 409 Marine Parade and is one of Napier’s oldest, independently owned restaurants in Hawke’s Bay having been established in 1983.