Henry Hill School Flood Recovery: “This is tough, but we are tougher” 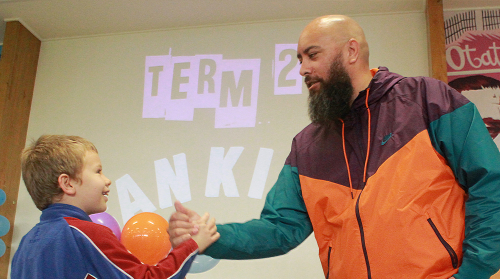 Jason Williams is never one to shy away from a challenge.

The inspirational Henry Hill School Principal is well-known for motivating his staff, students and school community with his can-do attitude and words of encouragement.

So when a one in 250-year flooding event destroyed much of the Napier school’s buildings and infrastructure, and learning for the remainder of the year looked unlikely, Jason said “bring it on”.

“Just another challenge to overcome. 2020 has been different, but we’re built different! Challenge accepted.” Jason wrote in an update to the school community via the Henry Hill School Facebook page.

Jason admits he was in disbelief when he came out of a meeting on Monday, 9 November at around 5.30pm, to see much of the school already under water and surrounding roads flooded.

“I live a four-minute walk from school but a colleague offered me a ride home so I didn’t get wet,” Jason says.

“It felt like it took an hour to get home due to the extent of the flooding. My colleague’s car flooded and I ended up walking home!

“As I was walking, the water was between knee and waste height and every car that went past gave me a decent splash in the face. I felt like I was in a movie. It was surreal.”

Jason, along with several other Napier schools, made the call on Monday night to close school on Tuesday until the extent of damage was known. While many schools returned to normality on Wednesday and Thursday, sadly Henry Hill School was severely damaged.

“I was back at school at sunrise the next day to assess the damage. I immediately knew it was going to be bad because it was past my knees on the field. I used the school drone to take some footage and sent it to the Ministry of Education, advising them of the situation and asking them for support. They came through in the following few days, along with the Ministry of Health, and realised it was pretty bad.”

Two thirds of the school’s buildings (accounting for five classrooms) along with learning resources and the playground were destroyed by contaminated flood water that reached up to 45cm high.

“I’ve been at Henry Hill School for eight years and there have been some challenges over the time, but this really does take the cake.”

Once given the go-ahead to clean-up, Jason reached out to the community for help via the school’s Facebook page.

“It was important we re-opened as soon as possible. For some of our students, school is their one constant and where they feel the safest.

“Volunteers came in droves –hundreds of people. People just turned up with shovels and spades asking what they can do. I didn’t know who most of them were. A little old lady in her late 80s even came and asked how she could help. It was humbling.

“Taradale High School, of which we have no affiliation, was the first to reach out and offer buildings to temporarily teach from. We were inundated by genuine, heartfelt offers. It made me realise there are still some really nice people out there.”

Volunteers stripped the classrooms, including the carpet and jib, leaving just the frames. They removed furniture and resources that were savable and relocated them to other areas of the school.

“Between the community and staff, we also shovelled out over 10 tonnes of bark and silt from the playground. PortaSkip was amazing and brought bins back and forth for us all day. The driver from PortaSkip said the last load we put through was the heaviest he’s ever had to carry.

“It made a massive difference. We re-opened six days after the flooding, which is amazing when it was looking like we couldn’t open again this year. Without the community’s help, we could never have done it. We’re beyond grateful.”

Approximately 240 students of 285 returned to school the following Monday along with the school’s 14 teaching staff, learning and working from the hall and spare classroom spaces.

“It’s highly unlikely that we’ll move back into the same spaces next year. Unfortunately, with contractors being so busy and supply shortages, we’re going to have to wait and be flexible for a little while yet. We won’t know until March/April next year what the true cost of the damage is.”

Despite the dire circumstances, Jason remains upbeat and hopeful. He believes the flooding event, along with the COVID-19 pandemic, have given people a wake-up call to slow down, reset and get back to basics.

“I think Mother Nature is trying to tell us something. We have been given opportunities to reconnect and check in with our family, friends, neighbours and community and disconnect from devices. There has been an outpouring of kindness. We should be doing this all the time, not just during natural disasters.

“We’ll get through this. It’s tough, but we are tougher.”