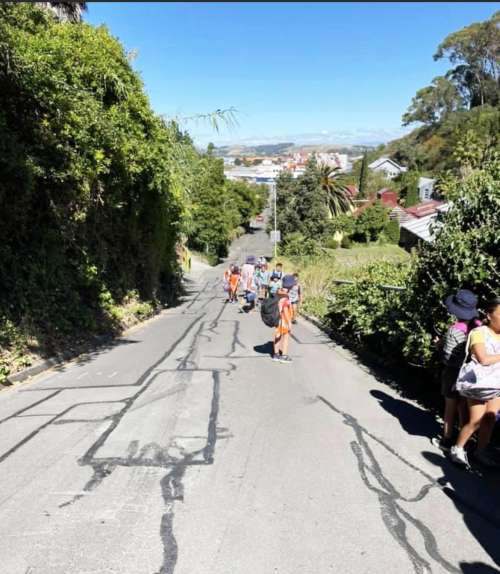 But on Friday, 5th of March, when a magnitude 8.1 earthquake struck the Kermadec Islands at 8.28am and resulted in a tsunami warning for much of the north island’s coastal towns and cities, that view was bittersweet.

“We had the radio going in the office so we were listening for updates,” Martin says.

“My staff kept nervously looking out at the ocean.”

While Westshore School falls in the orange evacuation zone set by Hawke’s Bay Civil Defence and Emergency Management (HBCDEM), Martin said he didn’t want to wait to evacuate only to discover he had left it too late.

“The safety of my staff and students was, and always is, my main priority.

“I phoned the Ministry of Education and Civil Defence to let them know what we were doing. I acted quickly and walked around each classroom to tell my staff that we were going to evacuate, purely as a precaution, and to get the children to meet outside on the field in five minutes.

In his 14 years as Principal, Martin says it’s his first time he’s had to evacuate the school due to a tsunami threat but he has seen how fierce the ocean can be, with waves crashing into the foreshore carpark just across the road on a number of occasions.

With 125 students on the roll, Westshore School’s evacuation plan sees staff and students proceed to Napier Central School, on Napier Hill, via Pandora Road and Main Street. Some students, along with First aid equipment and water bottles were transported in cars driven by staff, while the remaining 60 students made their way by foot.

“The senior students and leaders put on hi-vis vests so they could help stop cars so the junior students could cross the roads safely. It just so happened that some police officers were passing so they stopped and managed traffic on Pandora Road so we could cross safely also.

“The children were fantastic. No one was panicking or worrying.

“Napier Central School gave us their hall to use and put on a whole lot of sausages. By the time we got there Te Awa School had evacuated there too. Everyone was incredibly supportive.

“I kept parents informed throughout the entire process and some parents came and picked up their kids early. By the time we got the all clear to return we only had eight students left and they were transported back in the car.”

In the days following, the school undertook a review of the evacuation procedure and they have worked out what areas need to be improved and what worked well.

“We learnt that we could do with a specific get away pack in each class, with things like maps and first aid equipment.  I was really impressed with how things went overall. It took us 45 minutes to get to Napier Central School, which was much quicker than our previous drill, which took one hour and 20 minutes.

“The students were impeccable, and we’ve had good feedback from parents. They were pleased we evacuated and erred on the side of caution. I couldn’t speak more highly of my staff, who made it that much easier to get our kids to safety.

“It’s amazing how the community comes together to pitch in at times like that. It’s just terrific,” Martin says.