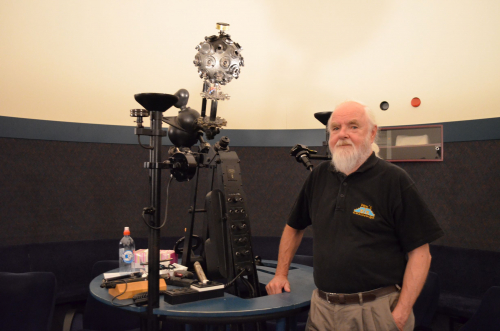 Most people leaving the Hawke’s Bay Holt Planetarium after visiting have only one word – “Wow!”

Quite possibly Napier’s best kept secret, the Holt Planetarium is home to a magnificent Zeiss planetarium, which projects the current night sky – including over 3000 stars, the moon, planets and the Milky Way – into a purpose-built fiberglass dome, six meters in diameter.

Hidden amongst Napier Boys’ High School buildings, in Chambers Street, the planetarium is one of only five planetariums of its kind in New Zealand.

“People have been studying the position of stars for well over 100 years and they have such sophisticated instruments that they get very precise information,” Gary says.

“There’s a space craft up there now called Gaia, which has recently released data on 1.8 billion stars in the Milky Way, such as exact positions and movements, and it has predicted with great precision the stars’ position for 40-50,000 years from now.

“We take that data and build it into the planetarium. Because it was made in 1961 it is analogue, so all adjustments are done by hand. The sky changes one degree each day.”

The Holt Planetarium holds public viewings every Sunday at 7pm and also hosts private programmes and lectures for school groups, weddings and birthday parties. General viewings are around one hour and consist of a presentation in the lecture theatre followed by a night sky session in the dome room.

The Planetarium is particularly beneficial on a cloudy evening when the stars aren’t visible, or for parents with young children who want to share the wonderment of the night sky with their youngsters but are reluctant to keep them up later during daylight saving.

“The special thing about this is that people get a tour of the night sky as it will appear in real life on the very day of their visit.

“I do a presentation called “Stories of the Stars” where we look at all the different aspects of the stars – from a scientific point of view of how they got to be where they are, as well as the traditional cultural point of view. I also do a specific presentation around the time of Matariki.”

A former mathematics teacher from Canada, Gary admits he has been fascinated by astronomy since a young age when somebody showed him Saturn through a telescope.

“When you see the rings of Saturn through a telescope that will affect you in some way. They really are something special. From then on I was hooked and I have studied astronomy as a hobby ever since.”

Gary says the patterns that we see in the sky haven’t changed in thousands of years and won’t be changing for thousands more.

“We’ll look at the Southern Cross for thousands more years but eventually we’ll have a Southern Triangle because one of the stars is going to vanish.”

If you’re keen to find out more about the science, facts, myths and legends of the mystical stars and planets above, head along to the Holt Planetarium any Sunday at 7pm. From 1 April, adults entry will be $10, students/seniors entry $6, or $25 for a family. For more information, visit - Holt Planetarium