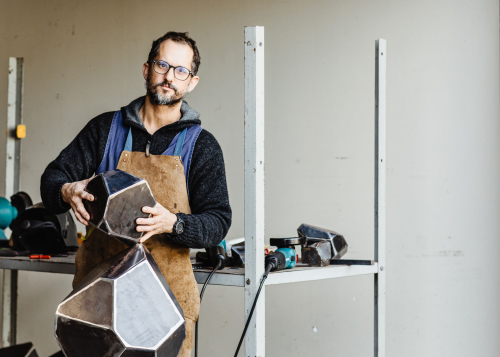 Napier-based sculptor, Ben Pearce, has been named the winner of the prestigious ‘4 Plinth Award’ from the Wellington Sculpture Trust, which will see his origami-inspired, steel sculpture ‘Paper Pals Aotearoa’ installed outside Te Papa Museum in Wellington.

The idea for Ben’s award-winning design, which consists of four two-metre-high origami style animals, stemmed from doing the Japanese paper-folding art with his two children during the 2020 COVID-19 Lockdown. Little did he know that 12 months later, a simple pastime would lead him to the $50,000 accolade.

“Submissions were invited around the time of Lockdown so I was already thinking about what I could enter,” Ben says.

“I thought origami would be awesome because the effects of COVID-19 on people’s lives have been massive and the last thing that project needs to be is something hard to understand and unengaging. I felt it needed to be fun, so I chose animals that identify with different countries –a panda, monkey, pukeko and a hedgehog dinosaur.

“I'm both excited and honored to receive the award and be able to bring these sculptures to life. Having work in the public space is going to be interesting – it won't be mine anymore; people will respond in ways I can't predict. That's the part I'm looking forward to!”

While this is his most significant award of his career to date, Ben’s work, which predominantly features wood, stone and metal, has received notable praise in the past.

The award that had the most impact on him personally as an artist, however, was the Telecom Telephone Book Art Award, which saw his art chosen to be on the cover of the Palmerston North telephone book in 1994, when he was a student at Freyberg High School.

“To be on the cover of every phone book in Palmerston North was amazing for me. That award gave me the confidence I needed to go to art school.”

Ben went on to complete a Bachelor of Fine Arts in 2003, majoring in sculpture, at Whanganui Quay School of Fine Arts. After graduating he moved to Wellington to launch his career, and like many artists, struggled to find a space to create, until he discovered Hawke’s Bay-based artist, David Trubridge.

“One day I went along to Te Papa to hear a talk by David Trubridge. He talked about a workshop that he’d set up in Napier, where artists could collaborate and share office space, machinery and equipment.”

Ben pursued the opportunity, which saw him move to Napier in 2005 and become an employee at David Trubridge Designer Lighting shortly after. He continues to work there, whilst also working on his own commissions.

“I'm very fortunate to have been working with David for over 13 years. He sets the bar high so right from the beginning I have had to work to a very high standard. It has put me in good stead.”

Ben says he is proud to call Napier home as it is vibrant without the frantic pace of bigger cities.

“Napier is close enough to my family in Palmerston North and my wife, Laura’s, family in Wellington. It’s also far enough from the busyness of the big cities. I think living in Wellington or Auckland you could quite easily lose perspective on what’s important in life, which, for me, is family and forging your own path,” Ben says.

You can see Ben's work through Parlour Projects in Hastings and Milford Galleries in Dunedin. He also has work held in public and private collections in Australia and Europe. And in January you can see ‘Paper Pals Aotearoa’ for yourself outside Te Papa Museum in Wellington!