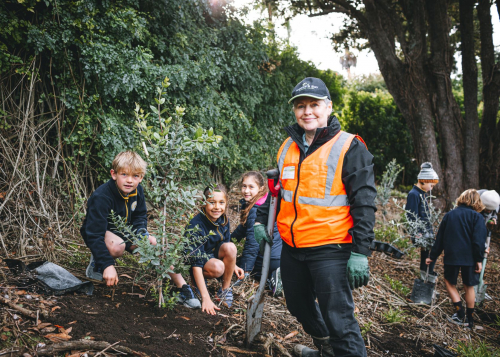 A section of the Guys Hill Road Reserve, between Ormond Road and Guys Hill Road on Napier Hill, has had a spruce up thanks to green-fingered students from Napier Central School.

Senior students spent the day recently with staff from Napier City Council, Enviroschools and Hawke’s Bay Regional Council, along with teachers, replacing troublesome weeds with 200 native trees and shrubs, to beautify the area and attract wildlife.

Napier Central School teacher, Liz Perry, says the idea to replant the 200 sqm area, which is more commonly known by students as the ‘Secret Pathway’, stemmed from an existing guardianship of Gleeson Park, where students spend time regularly watering, weeding and picking up rubbish.

“We have had a partnership with Napier City Council for the past 10 years, assisting with the replanting of Gleeson Park and the kids were keen to do more,” Liz says.

“I noticed an area in the Secret Pathway that had been cleared due to being overcome with weeds. I thought it was a great opportunity for the students to learn new skills and make a difference by adding some native plants.”

Napier Central School is no stranger to caring for the environment. It is one of 36 schools in Hawke’s Bay that is part of the nationwide Enviroschools programme, which sees schools commit to a long-term sustainability journey, where students connect with and explore the environment, then plan, design and take action in their local places in collaboration with their communities.

The project was funded by Napier City Council’s Te Puawaitanga – Green Communities Together Fund and was planned to align with Matariki, a significant time in the Maori calendar, which is historically known to be a good time for planting, harvesting and hunting.

“This project tied in beautifully with everything that we stand for as an Enviroschool,” Liz says.