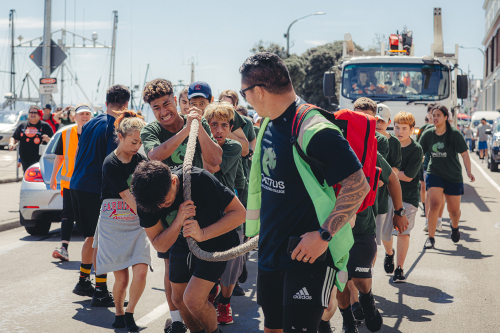 What CACTUS-Te Vaka Māia teens go through together would test many adults, yet it’s the challenges and ultimately, successful tasks they put themselves through which keep them coming back, year after year.

Teamwork. It can be a hard thing to get your head around if you’re more used to thinking, and acting as an individual.

For the 31 teens who have been through this year’s CACTUS-Te Vaka Māia course at William Colenso College (WCC), they know exactly what teamwork is, how to step up and solve a problem, and be inspired to do more, not less.

Being on this eight-week course has meant getting up early three times a week, and blasting through 75 minutes of physical activities from 5.30am before sitting down to a hearty breakfast provided by Te Kupenga Hauora-Ahuriri. The course finishes with a 36km active finale, aka The Longest Day. Very active.

Head girl Patisepa Tuua has attended the course three times. For the Year 13 student, it has been a confidence booster. She feels more prepared for her future, which includes university, she says. “It’s really helped me mentally, and physically, and for my leadership, with public speaking. I’ve really enjoyed joining in and helping the other students.”

For Roman Stuart-Gray and Maia Kirkpatrick, both Year 11s and first timers on CACTUS-Te Vaka Māia, the word ‘fun’ pops out several times when they are asked to describe what it has meant to them.

You soon realise you have to participate fully – the more you put into something, the more you get out of it, says Maia.

“The longest day is the most challenging physically, but really it’s a mental thing, because you have to push yourself. It teaches you to put other people first,” she says.

This year’s Longest Day started at 6am on a Saturday. Along with some of their adult supporters, they carried weighted heavy poles, jerry cans and tractor tyres from Pandora Pond to Bay View, Napier Hill and Ahuriri. They then dropped that gear and picked up ropes to haul a truck about 3km back to the starting point.

CACTUS stands for Combined Adolescent Challenge Training Unit, and has been run in some schools in the North Island since the early 2000s. This year WCC, which has hosted the course since 2012, has added Te Vaka Māia, meaning Vessel of Courage, to its title.

Initiated by police, CACTUS-Te Vaka Māia allows them to build positive relationships with rangatahi, their whānau and the wider community.

Students receive a free pair of training shoes and a personal logo T-shirt for training. The course is financially supported by Napier City Council, Te Kupenga Hauora, Police, Pak ‘n’ Save and Unison.

The adults either train with the students, or help out in other ways. Seeing how people work together for the good of the group is a life changing experience, and helps the kids reflect on, and respect what they do.

Students have to apply to be on the course, and range from those who could do with some support, to some needing a boost, to those with leadership potential.

The positive vibe participants get from the course has seen more than one school leaver come back for more, says WCC Transitions Coordinator Henry Ballantyne, who helps oversee the programme.

“Having the added disruption of a lockdown right in the middle of the training programme made the achievement event greater in 2021.”