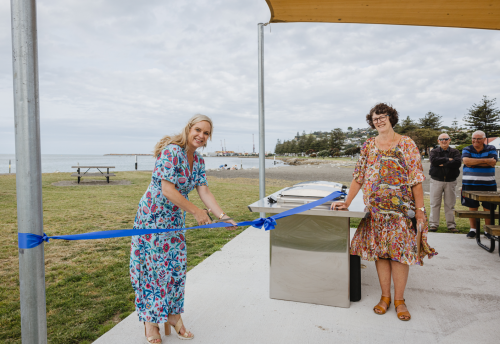 Sausages sizzling on a barbecue can bring back happy memories of summers past.

For a group of Rotarians, every time they pass by one particular barbecue spot in Ahuriri, it will also remind them of their friend and fellow Rotarian, the late Mike Smith. Mike was one of the main drivers of the recently installed shade-sail covered barbecue area, in front of the Harbour View Lodge, to mark the 50th anniversary of the Rotary Club of Ahuriri. He died suddenly before the project was completed.

“Rotary had already gauged the interest from residents and businesses in the area, so it was easy for us say yes and work with Rotary to see this project through to its end. It’s something that will enhance what is already a popular recreational spot.”

Rotary approached Napier City Council with the proposal to develop the area, which includes seating and picnic tables. It is next to the treasure chest, much loved by children, another Rotary funded project, built by Napier Menzshed.

The new “sit and stay” area complements the large playground at the park which the club also collaborated with the Council on, says Sue Page, current Ahuriri president.

The area is sure to be used frequently over the coming years, given Ahuriri’s growing popularity as a place for people of all ages to gather.

It is a fitting spot to remember one of life’s go-getters, she says.

“Mike was a very service oriented person, involved with a lot of organisations such as Community Patrol. He was one of those people who, if asked if he could help with something, would never say no.”