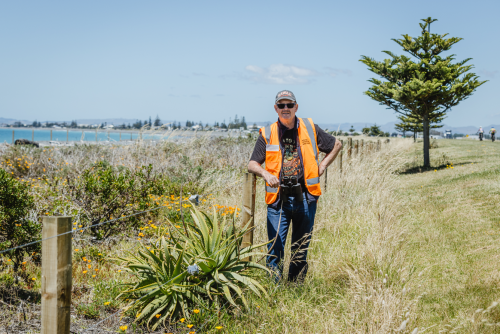 Dotterels face danger every day while breeding. From the air, by black backed seagulls and hawks hungry for eggs and chicks, and on the ground, from being run over by oblivious quad bike riders or trampled on by a dog or a human.

The group Save The Dotterels Hawke’s Bay was started by local Paddy Cooper. The volunteers do what they can to protect this threatened species, through actively monitoring nest sites, and raising awareness in the area and online.

Among those to offer assistance is Napier City Council, which has fenced off a 300 m long area of the beach. When the breeding season is over, the group will compare the results to an unfenced area further down the Hawke’s Bay coast, to see whether it has had a positive effect.

Building a fence is a relatively small thing, which could make a big difference to the group’s efforts, says Jason Tickner, Team Leader Parks, Reserves and Sportsgrounds.

“This is a great example of ordinary members of the public doing something extraordinary, and we’ve been more than happy to help in this way.”

The group’s Facebook page which Paddy set up 18 months ago has 400-plus followers. About 15 of the members, from throughout Napier, take turns to monitor the nests during breeding season, between July and January, sometimes stretching into February. They tend to move inland once the season is over, although some fly all the way to Australia.

Paddy and his wife Glyn were the first to install signs about the birds, followed by similar ones from Council, the Department of Conservation, and Hawke’s Bay Regional Council. After Glyn and Angela Cave shared some information about the birds with Westshore School, the children produced some colourful ones to add to the beach.

Forest and Bird have sponsored high-vis vests, signs and also stakes and rope to cordon off individual nests outside the fenced area.

Ensuring people in the area know of the birds and their behaviour is most important, says Paddy, who affectionately calls them “dots”. “Public awareness is a huge thing. We tell people about the dots, and we know they do pass it on.”

If you see a bird that looks like it is has a broken wing, it’s to distract a potential predator to draw it away from the nest. During the season it is also good to leave driftwood where it lies at this time, as it creates good hiding spots for them.

Group members have lots to celebrate at the moment, having found 22 nests so far.

Paddy and Glyn, both recently retired, so can spend a lot more time looking after the dots, with the help of the rest of the group, and the wider community.

“I must confess though that even when we go away from time to time we tend to visit nesting sites in other areas, to see what they do and how their populations are faring.”

Image: Paddy Cooper, founder of Save The Dotterels Hawke's Bay.