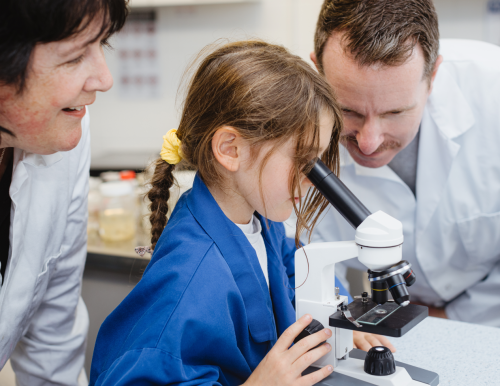 Nano Lab runs from 17 December – 29 January with four sessions a day, traversing a range of hands-on activities, videos and fun facts. It is part of the ‘zoo inside the aquarium’, connecting the ‘nano-world’ to the various species they find there, including humans.

Amy Stevens, Education Manager at the National Aquarium, has worked closely with NIWA, University of Otago and Florida State University gathering material, videos and imagery. She is excited to be able to share this with visitors, to help them discover the world of ‘nano’.

“Eighty-five percent of the world is made up of microscopic species, a world we don’t see,” says Amy. “It is a fascinating world and sometimes a bit icky but essential for biodiversity.”

Visitors to Nano Lab can become ‘scientists’ for a short time, looking through the lens of a microscope to see slides of species such as ticks, tapeworms and dragonfish.

The National Aquarium educators will share some fascinating facts, such as, that every second breath a person takes comes from tiny phytoplankton, a microscopic plant that lives in the ocean. Phytoplankton absorb carbon in their bodies that sink into the ocean, releasing oxygen, reducing the effects of climate change.

Who knew that humans rely on the tiniest living things in the ocean, for survival? Sharing facts like these with visitors is one way to raise awareness of why the ocean should be protected.

Visitors can find out more about the bacteria sharks carry in their teeth to help break down bone and shells. Sharks wouldn’t survive without these useful microorganisms.

Then there are thousands of tiny creatures, such as the wonderfully named Skeleton Shrimp and Mud Dragons, which live on the back of turtle shells.