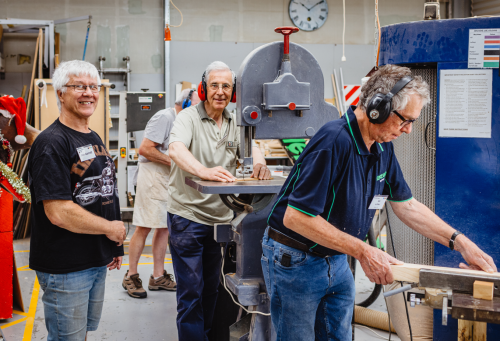 Just after 8am, six days a week, vehicles start to arrive at 125 Latham Street, Napier.

The ticking of the cars’ cooling engines fades away as machines of another kind start up inside the building, where Menzshed Napier has been based since 2017. It is one of 124 in New Zealand, one of thousands worldwide.

You will find men here several mornings a week, and most Saturday mornings too.

The chatty ones start to banter, others prefer to pick up whatever they have been working on and just get on with it.

Most of the 80-plus members are retired. Some have been drawn here by a need to keep busy. Others have found the solitude post-retirement not to their liking. The decision to drop in and see if they can develop new skills or dust off the old ones, sometimes leads to finding a few new mates too.

Napier Secretary Jon Barrett initially joined because he wanted to expand his practical skills. It is as much about feeling encouraged as it is about making things, he says.

“The best thing about being here is that it’s good for your mental health. It gives us all a sense of purpose.”

It’s a safe space for men to work, either for their own enjoyment, or to share the load on a community project.

One of their most visible and photographed ones is the giant, bright-coloured Cape Cod chairs at Ahuriri.

Menzshed Napier’s latest projects include the Fairy Doors at Park Island in the October school holidays.

The Breeze Hawke’s Bay approached Menzshed for help, the end result being 15 unique and imaginative doors that delighted little ones happy to go looking for the fairies’ homes.

Real estate firm Harcourts regularly asks Menzshed to make the wooden stands for ‘for sale’ signs. They have also made over 300 bed bases for Christian Lovelink in the past year.

Napier members are also responsible for pre-cutting wooden Christmas decorations for Mitre 10 Mega Napier’s Ladies’ Night. Attendees have a go at finishing them with a skill saw, then get to take them home.

Inside the Latham St building, you can see wooden toy cars and boats at various stages of production.

There are weathervanes and chairs under repair. Some belong to members of the public who have heard that Menzshed members will fix items, for a small fee, sometimes for free. Fundraising is important, as the organisation relies on this, as well as donations of materials and sponsors to get by.

A few people have used the on-site 3D printer for various components. One has 3D printed an entire model aeroplane that is now hanging on display from the ceiling.

There are many, many objects to admire. Some are crafted from the most unlikely things, such as a goblet made from repurposed coloured pencils.

The noisiest section is where the metalwork takes place, and larger projects are assembled. There is also a piano, protected from dust, the speciality of Ian Appleton.

The fifth generation piano tuner has restored three of the instruments so far.

He says he is thankful he decided to check out Menzshed five years ago. “I’ve always worked on my own, so it has been a lifesaver.”